Momentom is a collective of circus artists, yogis and young entrepreneurs from all over the world. With a network of artist residencies in Nicaragua, Guatemala and Bali, Momentom is a nucleus for travelers who want to live transformational experiences, live in community, and train mind and body. To accomplish this, Momentom invites key speakers in emerging industries who can provide residents insight on emerging industries and the future of the creative entrepreneur.

So all good things come to an end, and Despite a rocky start to the season with earthquakes, tsunamis and volcanic eruptions in the area, we charged full steam ahead into the first Momentom season in the South Pacific. We are proud to say that it was a RAGING success that was filled with fresh coconuts, skinny dipping, sunset jams, beach clean ups, waking dreams, full moon parties, passion shows and some of our more advanced training to date.

On reflection, these were some of our biggest highlights of the first season in Indonesia.

1 Naked Ocean Swims
At Momentom, we train hard, but we play even harder. Living on a secluded lush coconut plantation in Indonesia means that we also get the ocean at our front step and our own private beach. After 4+ hours of daily training of our minds, bodies and working on our businesses, residents were no stranger to sneaky sunset skinny-dipping sessions as the blazing orange sun sent its last rays over the horizon.

2 Impromptu Music Video
Residency is home to acrobats, dancers, energy healers, designers, singer-songwriters and in one particular instance, a bomb-ass rapper named Gabriel Rima with a vision. On our way to a weekend getaway to a waterfall hike, we found ourselves with Global Degree and 14 other residents in a small bus. Once we arrived, the cameras were whipped out, music blasting and a bunch of freaky humans started dancing on top of each other for the worlds most impromptu music video. Gabriel, we wait for the shout out when you win that grammy award.

3 Gratitude Sighs
We believe that the more grateful you are throughout your day, the more optimal of an existence you lead. That’s why gratitude circles before meals are such a thing at Momentom. But Thomas Mangin, Cirque du Soleil performer and the most grateful son of a gun you’ve ever met, took gratitude to a whole different levels: through his breath.

From the moment he stepped into residency, it was not an unusual occurrence to hear Thomas Mangin and Danimal sighting with deep, DEEP relief for anything from happiness for the food, or happiness for their equally deep, deep bromance.

Follow Thomas to Guatemala, Nicaragua, Envision and the Aerial Retreat to hear the sounds of gratitude for yourself.

4 Rama & Shakti Bird
When two of our favourite influences came through our doors, we were bewildered. Rama and Shakti not only embody karmic & yogic philosophy in their actions, but their depth of knowledge on yoga asana and functional movement was incredible. Their humility and love for one another propagate from their every pore and as we watched them making them more and more comfortable within the community, we realised we had successfully aligned a dream to make Momentom residencies a hub for professionals, newbies and influencers to co-live under one roof.

5 Moo-filled yoga sessions
You know you are really out of the city studio when the thing that distract you away from your pranayama practice is the sound of a baby cow 3 meters in front of you. Whales and Waves was an orchestra of incredible sounds: ocean, wind, coconut trees and….. cows. After savasana, residents would take a quick rinse in the ocean and a quick stop to feed the cows before hopping into aerial class or before sitting down to hit business.

6 Josh’s Tattoo
If you have ever had the pleasure of crossing paths with Josh you will have your love for humanity reinstated within minutes. The man is incredible: at service to all, kind, humble, extremely talented and a friend to any. After almost three months of residency, the Momentom experience seemed to have shifted/ transformed/ moved something within himself as well, and he returned with one of the most beautiful tattoos of the Momentom Logo on his body to symbolize his experience.

7 Detachable Penis
Let us awaken your imagination. Its Friday night, 8 PM. The residents are prepping for the bi monthly passion show, a sort of demonstration of the ridiculous array of talent in house, professional or not, to the rest of the collective. 5th act to go up, Leila Magnolia and Therese Lowton hit the stage. Lights on. Blast off.

At first, the performance was smooth. Cute. The music became a bit more snazzy. A little more spicy. A little more …. WILD. The two girls turn to face the stage, and with man made props meant to resemble masculine genetialia, the girls bounce the rest of the performance to “detachable penis” by King Missile. The crowd goes wild.

All of those who were there will know what I mean when I write that that performance can never be unseen.

8 Volleyball & Coconuts
At least 3 times a week, a collective sunset volleyball game was underway. Overlooking the ocean, feet in the sand, fresh ocean breeze cooling off the bodies of highly competitive sweat- drenched participants. It was worth it- winners took home a well-deserved coconut.

9 Photoshoots & Jetskis
Having Global Degree, Michael and Devon, has become a norm in residencies for Momentom. Photoshoots with them are not the usual shoots, these guys dream as big as the founders of the collective. This time, it involved jetskis, babes on silks, acrobatics over hammocks, and cacao ceremonies. Stay tuned for the upcoming video with Global Degree and Women of the World and make sure to book your stay next time with them to have your chance to filling your pockets with high quality portfolio material and take part of a Momentom viral video.
​
10 Jules Schroeder & Unconventional Life
​Jules Schroeder, international Speaker, Musician and one of the founder’s good friends & mentor, Jules is also the sole creator of Unconventional Life – a super intense summit for people who run unconventional projects across the world. A summit for entrepreneurs, UL & MC collaborated for their second summit in Bali where 14 of Momentom Crew, Collaborators and Performers took the stage to discuss their project or perform they feats. With the blossoming of the collaboration, get in touch with Momentom for your chance to perform at UL with MC or to get a badass discount for being part of the Momentom Crew. 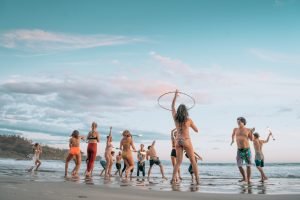